On the morning of September 14, a group of 15 students selected from Otis College of Art and Design arrived at LACMA to participate in the first day of a fashion design masterclass: Reinventing the Women’s Uniform Studio. The semester-long course is made possible by Santa Monica-based Martin Architecture and Design Workshop, or MADWORKSHOP, whose foundation fosters the next generation of design talent by partnering with academic design institutions and sponsoring mentors to teach college-level studio classes. It was no wonder the Otis students buzzed with excitement as they entered LACMA’s classroom—the course they were about to commence would be taught by acclaimed fashion designer Jason Wu. 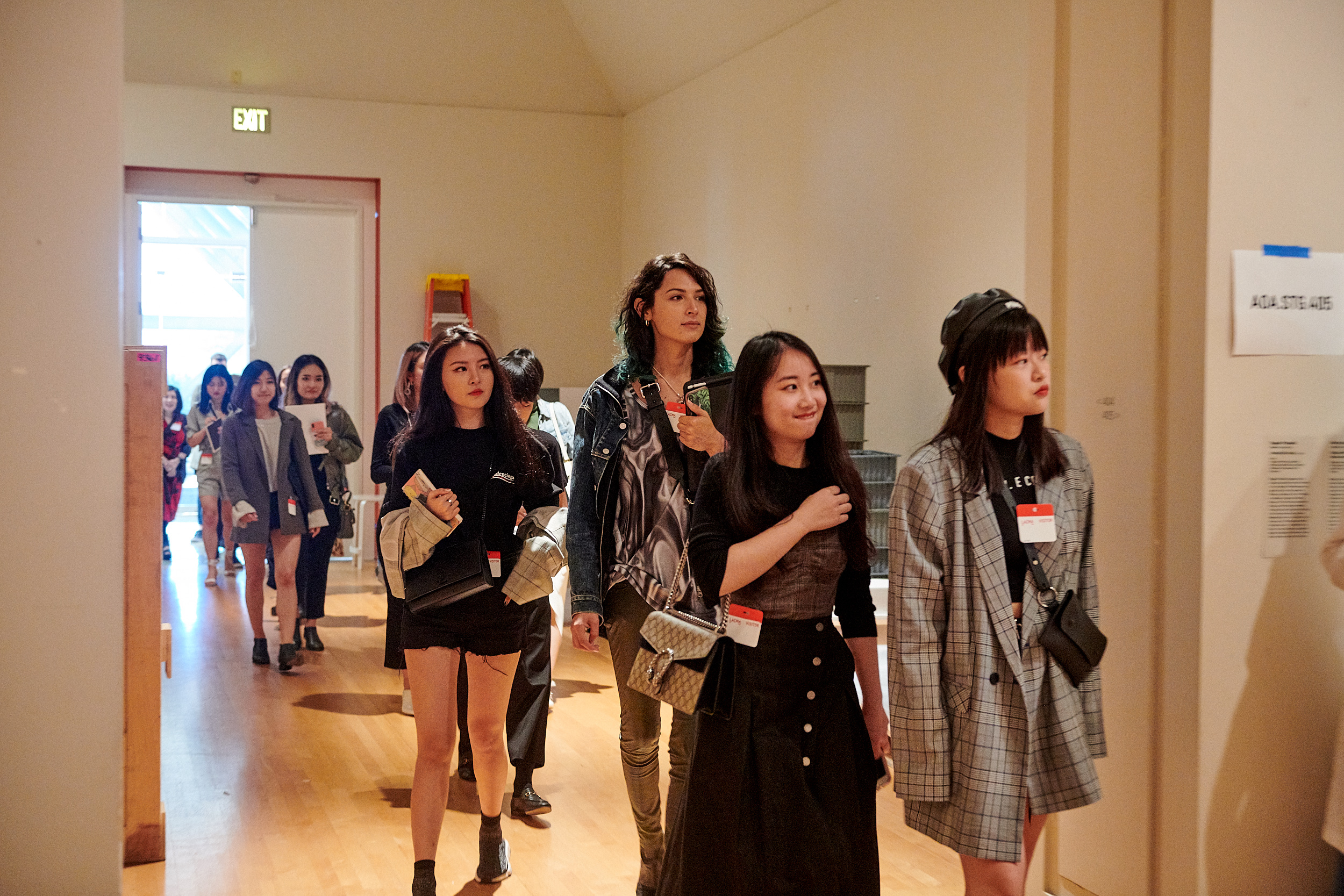 Students arrive at LACMA for the first day of their Otis College of Art and Design and MADWORKSHOP fashion design masterclass, photo © Buddy Bleckley courtesy of MADWORKSHOP

Born in Taipei, raised in Vancouver, and currently based in New York City, Jason himself had only arrived in Los Angeles the night prior to class: the designer’s eponymous ready-to-wear label has kept him busy since it was established in 2007. Jason Wu Collection’s chic and exquisitely crafted designs quickly garnered attention, accolades, and an influential clientele. In 2009, at only 26 years old, the designer became internationally recognized when his gown was selected by Michelle Obama to be worn at President Barack Obama’s first Inauguration Ball. Mrs. Obama revisited Jason’s sophisticated daywear and elegant, modern evening wear throughout her tenure as First Lady, and chose to wear the Jason Wu label to bookend important occasions from the Obama presidency, including President Obama’s second term Inauguration Ball in 2013 and again for his farewell address. A 2008 CFDA/Vogue Fashion Fund finalist and 2016 International Designer of the Year at the Canadian Arts & Fashion Awards, in 2018, one of the only roles seemingly left for Jason to achieve was that of professor.

MADWORKSHOP identified Jason as a mentor for the Otis masterclass thanks to his unique career and accomplishments, and invited him to bring his expertise to Los Angeles. The designer will be flying to Los Angeles a number of times throughout the course to meet with his class, while simultaneously continuing his work on the Jason Wu Collection in New York. Before the semester began, students were issued Jason’s directive for the course: research 1940s and 1950s uniforms and menswear tailoring in traditional suiting fabrics, and design a women’s sportswear collection that combines these elements with a couture spin for Spring 2020.

The MADWORKSHOP masterclass aims to train future fashion designers to seek inspiration beyond Pinterest boards, fashion magazines, and the work of contemporary fashion designers. To introduce students to object-based research, MADWORKSHOP arranged for the first session of Jason’s masterclass to take place at LACMA, where students were given a unique opportunity to study singular and historic examples of uniforms from the costume and textiles (C&T) department’s permanent collection. 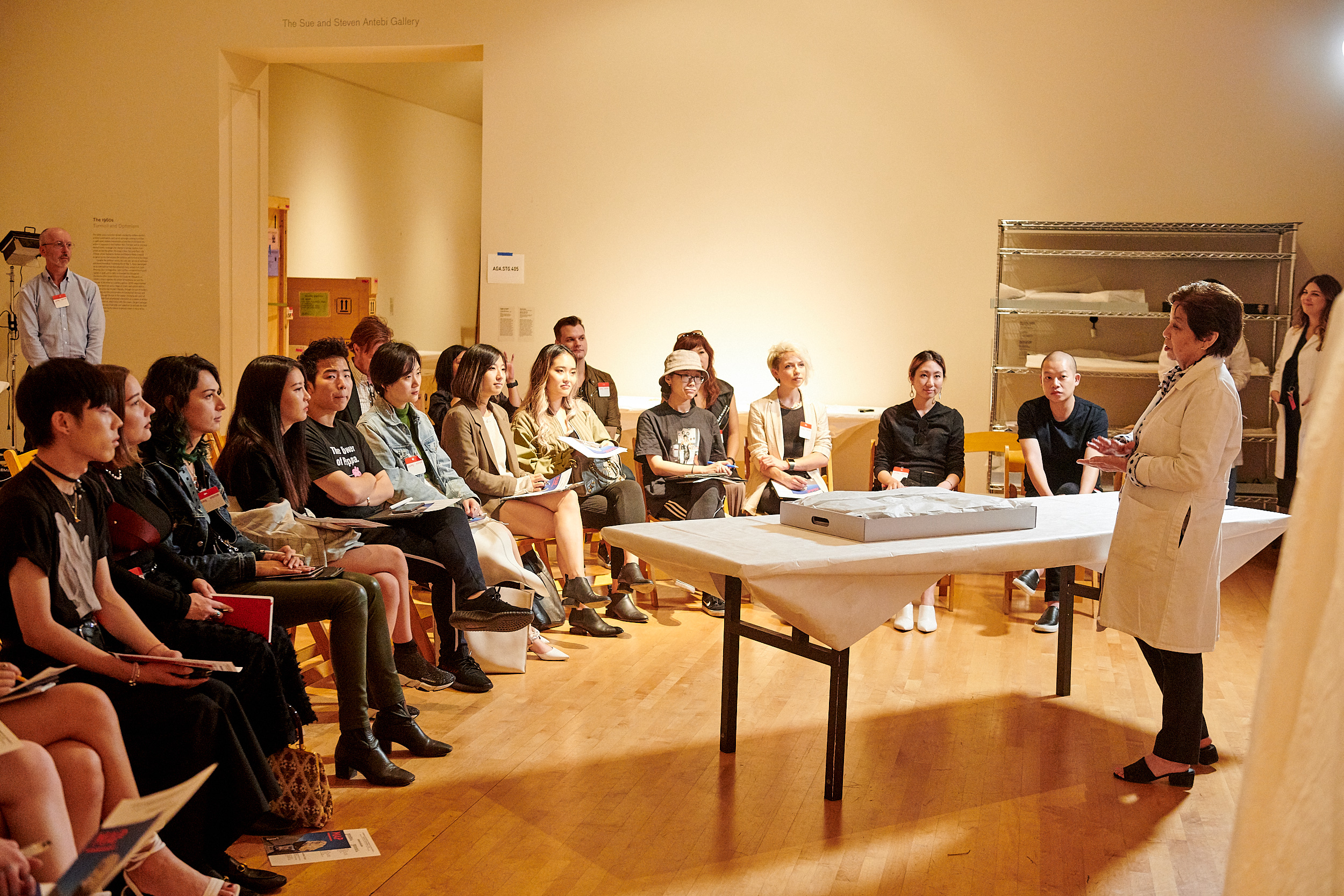 Sharon Takeda, senior curator and department head of costume and textiles, welcomes participants from Otis and MADWORKSHOP to LACMA’s classroom for a survey of permanent collection uniforms, photo © Buddy Bleckley courtesy of MADWORKSHOP

C&T staff prepared a survey of significant objects for the students to view, including a British Army uniform frock coat dating to 1855–65, and non-military uniforms, such as Boyd Clopton’s 1960s sketches for PSA airlines uniforms and the iconic hostess dresses created for the 1968 Mexico City Olympics. 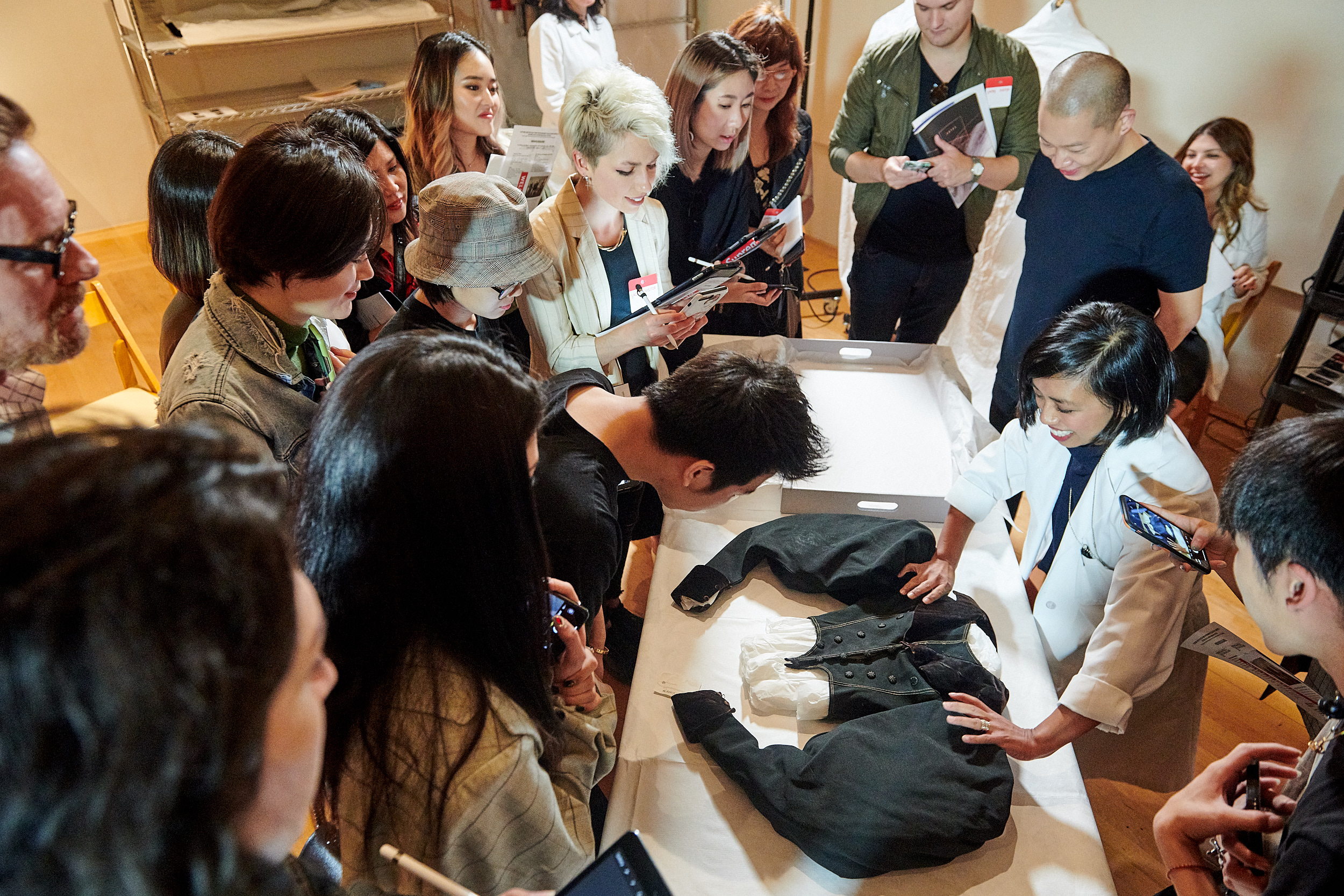 Objects reviewed by students demonstrated the influence of civilian sportswear, such as the Norfolk jacket, on military styles from World War II, as well as men’s tailoring techniques used to impeccable effect in women’s clothing by Gilbert Adrian and John Galliano. 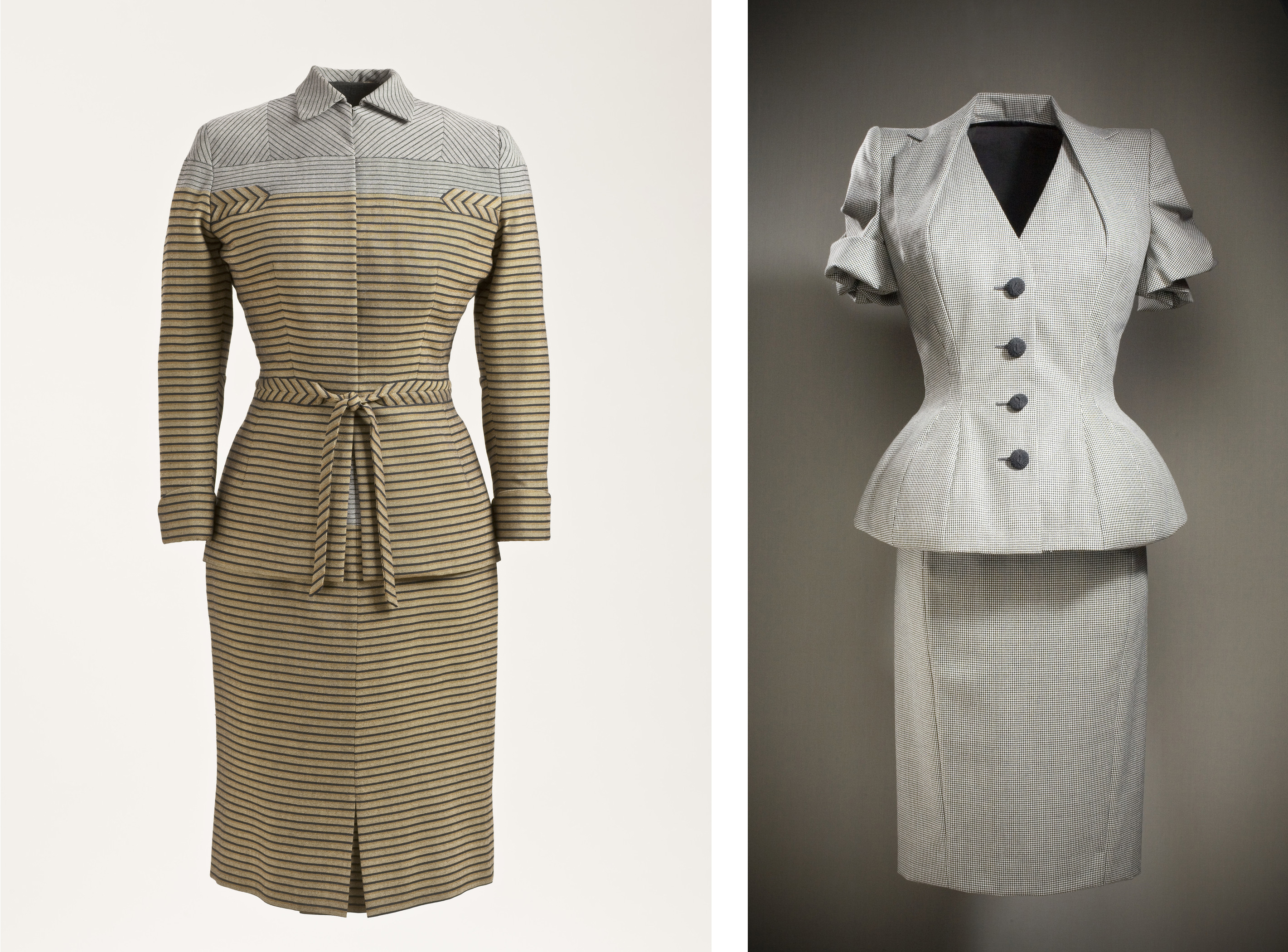 Students learned the history of camouflage and the trench coat and viewed designer interpretations of both, including works by Comme des Garçons, Thierry Mugler, Martin Margiela, and Christopher Bailey for Burberry. 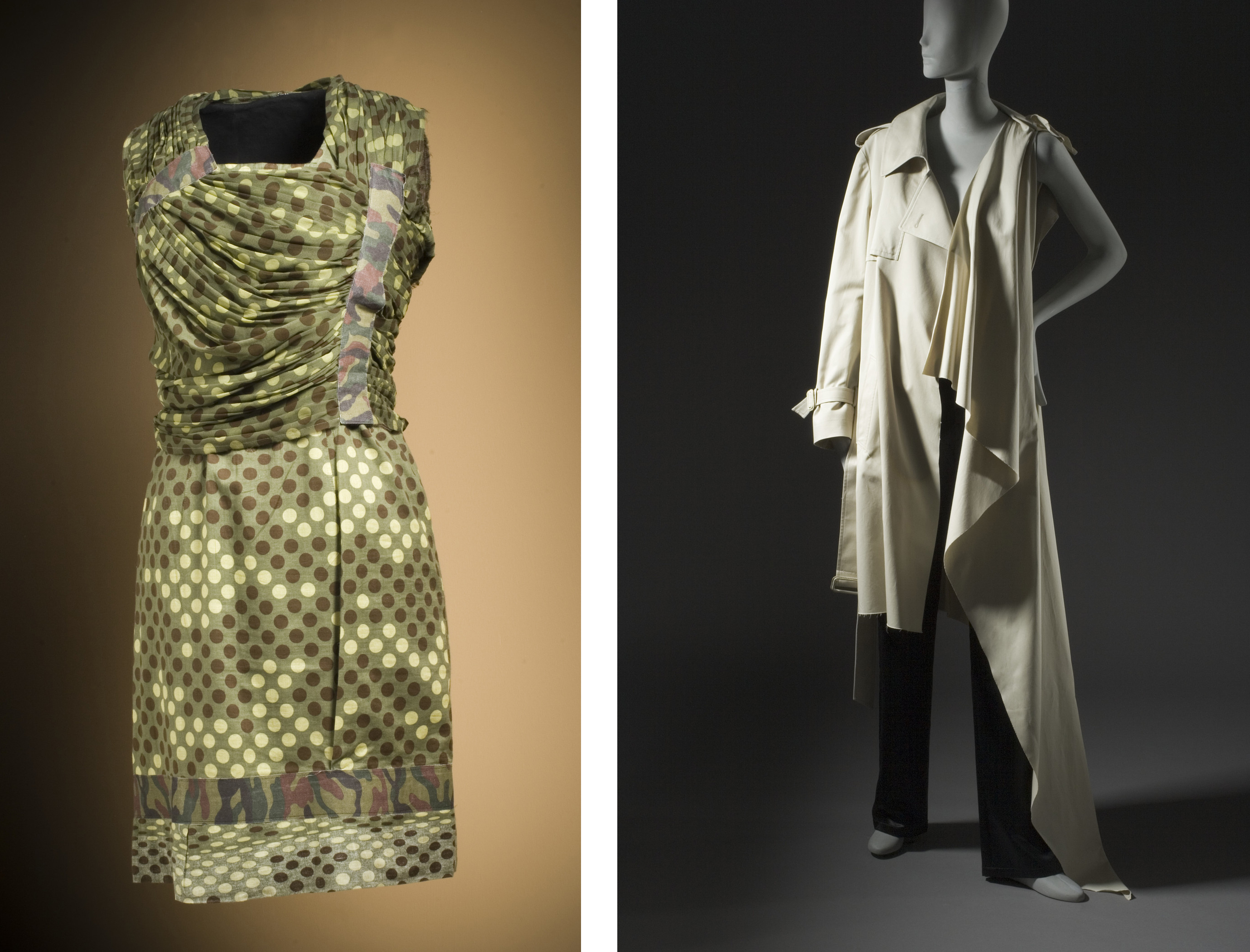 A historic range of fashionable uniform interpretations was on display, from 19th-century riding habits and an example of Norman Norell’s signature mid-20th century sailor-style dresses, to tongue-in-cheek designs riffing on military details from Franco Moschino and Jean Paul Gaultier. 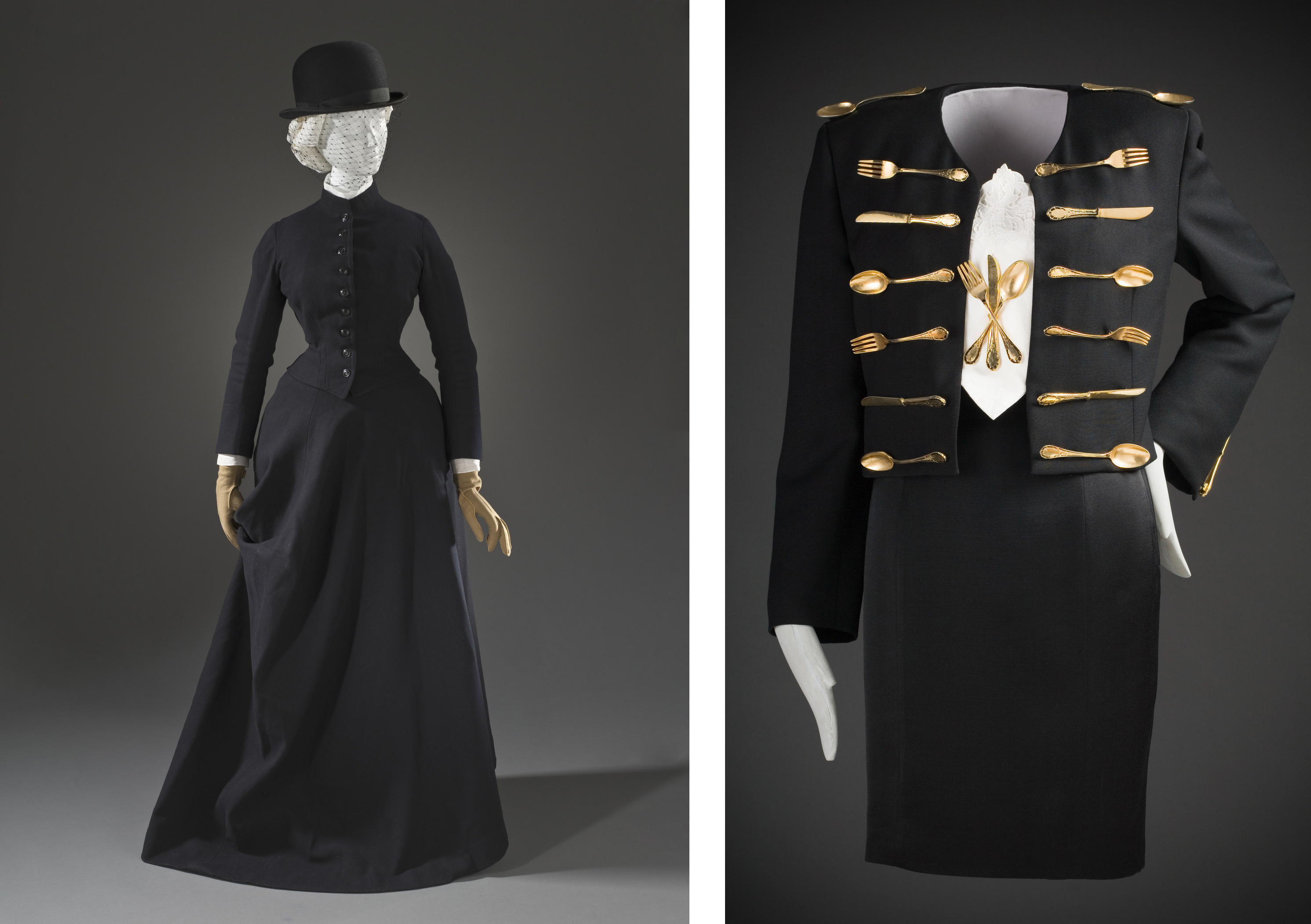 Throughout, students had the opportunity to look closely at the objects in order to examine fine tailoring and embellishment techniques, while Jason brought the students’ attention to elements he might incorporate in his own process of design research and inspiration. 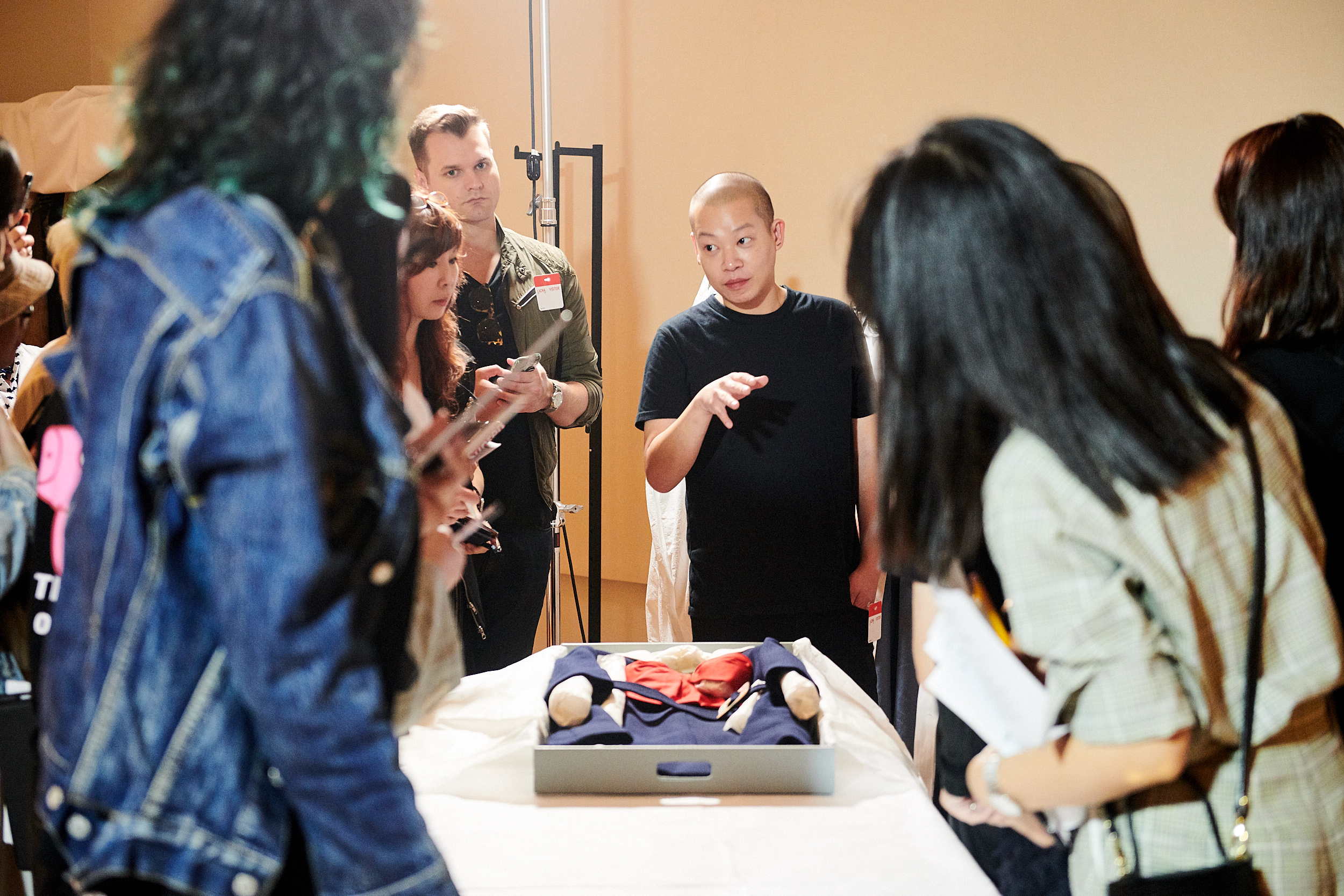 Looking at a sailor-style dress by Norman Norell, Jason Wu shares his appreciation for the mid-century American designer with students, photo © Buddy Bleckley courtesy of MADWORKSHOP

In the afternoon, students brought in boards of their own design work, based on the directives provided by Jason prior to the start of the school year. Fabric swatches, silhouettes, technical sketches, and fashion illustrations were displayed on tables to undergo a constructive critique. 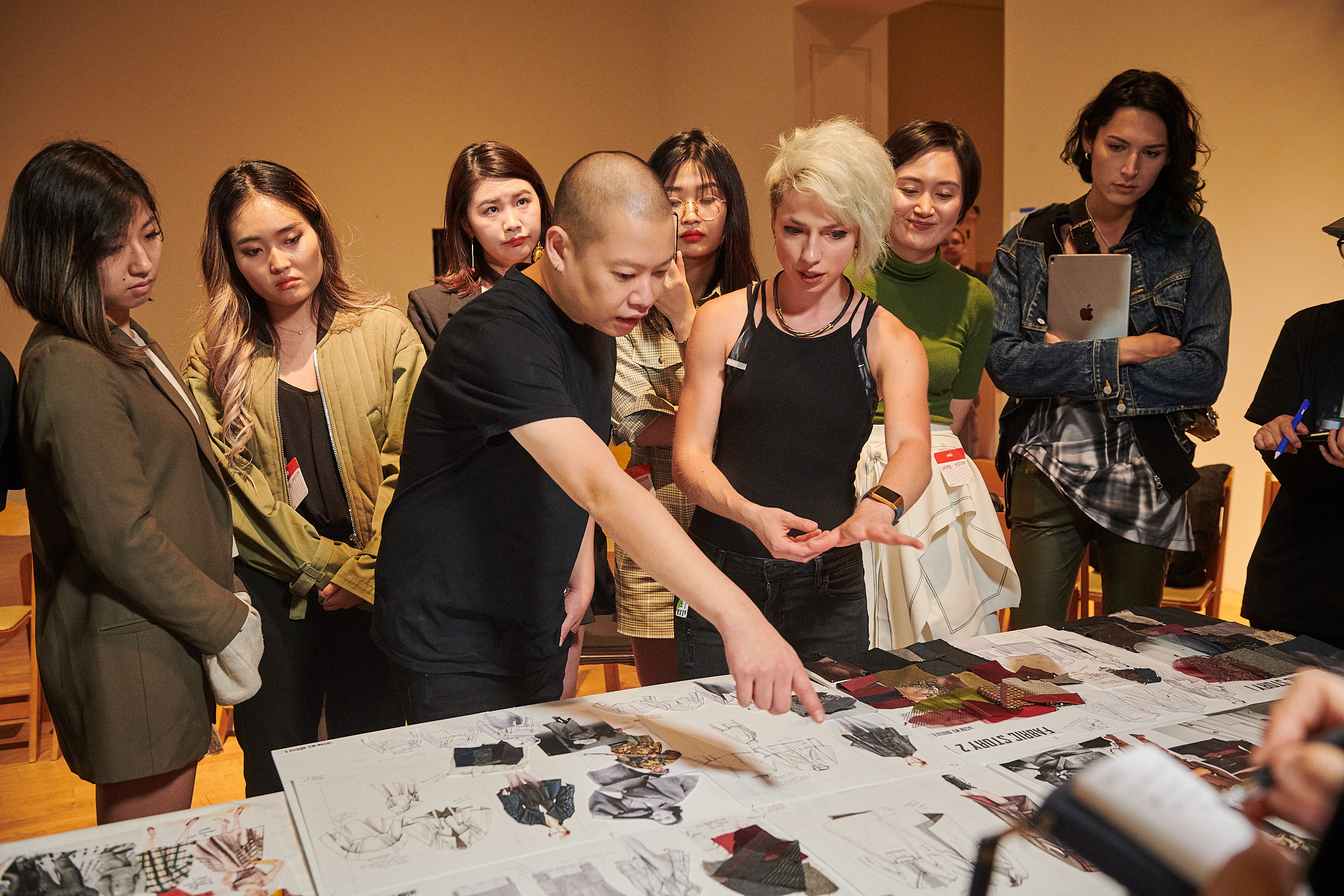 Reviewing each student’s work individually, Jason encouraged students to focus on elevating their designs through precise construction and “honest” material selections: natural, quality fabrics over complicated synthetics to allow patterning, cutting, and tailoring techniques to shine; quality hardware; and modern materials the students would want to wear themselves. These materials, he advised, highlight good design and look expensive when executed well, while also being accessible to students. He encouraged students to start with the fabric and let its properties inform the silhouettes, as he does with his own custom-designed textiles. 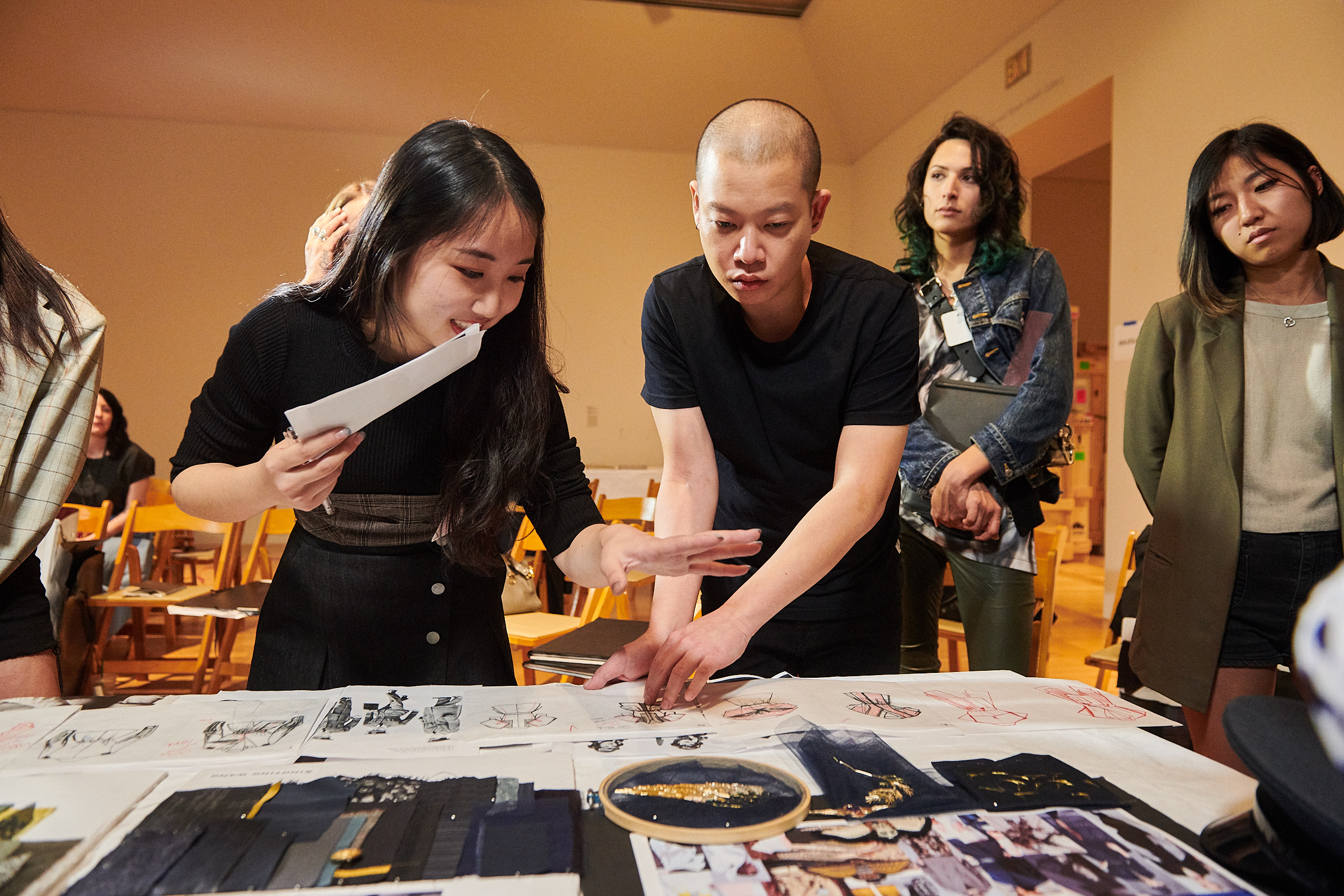 Armed with the inspiration provided by LACMA’s objects, each student will merchandise a 12-look sportswear collection combining military elements with couture touches. Over the course of the semester, through classroom visits and Skype sessions, Jason will select one look from each student’s collection to be produced, with the intention of creating a sophisticated and modern look that could walk straight off the Otis runway to be shown at Spring 2020 Fashion Week.

On Friday, October 26, at 7:30 pm, Jason Wu will be in conversation with LACMA’s senior curator of costume and textiles, Sharon Takeda, to discuss his career, design process, and classroom collaboration with Otis College of Art and Design, sponsored by Mary and David Martin’s MADWORKSHOP Foundation. Purchase tickets now for this event!